Historical Board of Trustees Meeting in Manas 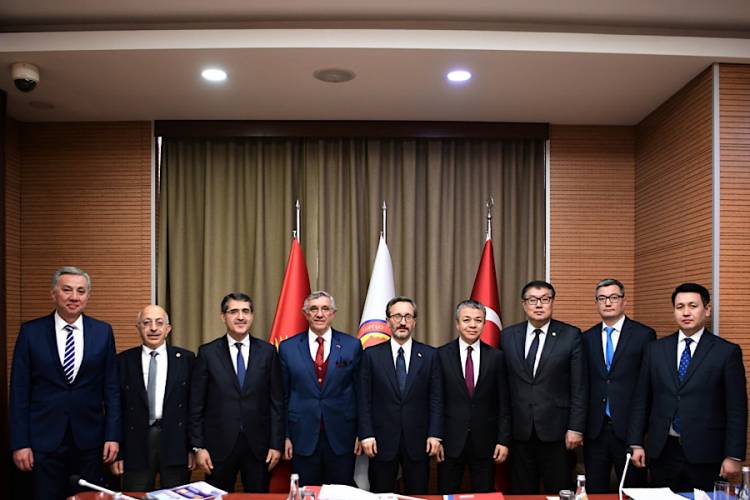 Kyrgyz-Turkish Manas University (KTMU) Board of Trustees Meeting was held.

On December 28, 2022, a meeting of the Board of Trustees for the regular 2022-2023 academic year of the university was held. The members of the Board of Trustees of the Kyrgyz-Turkish "Manas" University were: Deputy Minister of Education and Science of the Kyrgyz Republic Rasul Avazbek uulu, Deputy Minister of Foreign Affairs Aibek Moldogaziev, Department of International Cooperation of the Office of the Government of the Kyrgyz Republic, Deputy Head of the Department Talgat Ashirbaev, Chief Specialist of the Department of Examination of Decisions of the President of the Kyrgyz Republic, Timurlan Azhimaliev, Head of the Communications Department of the Office of the President of the Republic of Turkey, Chairman of the Board of Trustees Fahrettin Altun, Head of the Strategy and Budget Department of the Administration of the President of the Republic of Turkey Ibrahim Shenel, Rector of Canakkale Eighteenth March University, Professor Sedat Murat, Rector of KTMU, Professor Alpaslan Jeylan, First Vice-Rector, Professor Asylbek Kulmyrzaev.

Chairman of the Board of Trustees Prof. Dr. Fahrettin Altun in his opening speech said that the achievements of Manas University, the most important joint project of the two countries, are at an exemplary level.

Prof. Dr. Fahrettin Altun stated that Manas, whose scientific achievements have been confirmed by internationally respected institutions in the last 3 years, focuses on internationalization studies in every field and is rapidly advancing towards its goal of becoming a world university.

Prof. Dr. Fahrettin Altun emphasized that Manas University, which focuses on social responsibility projects, integrates with the society and contributes greatly to the consolidation of the brotherhood and relations of the two countries.

Prof. Dr. Alpaslan Ceylan underlined that Manas, the partner University of the Turkish World, will continue its activities stronger and more faithfully than ever before with the establishment of the Organization of Turkish States, which makes dreams come true.

Dr. Alpaslan Ceylan said that the meeting, in which the signatures of the official establishment of Faculty of Medicine were signed, has a historical importance and will be written in gold letters in the history of Manas University. Rector Ceylan thanked Chairman of the Board of Trustees Fahrettin Altun and the members of the Board of Trustees who gave great support to the establishment of the Faculty of Medicine on behalf of Manas Family.

University that brings Kyrgyzstan to the international platform

Acting Rector Prof. Dr. Prof. Dr. Asylbek Kulmırzayev also gave information on university-related issues at the meeting and stated that Manas University, which carries the country to the international platform in the scientific field, is a great privilege for Kyrgyzstan.

Asylbek Kulmırzayev stated that Manas' placing 801th among 1000 universities in the world in the QS ranking is the result of working with great effort and faith, but that success will not be enough for Manas, and greater success will be achieved with the created synergy.

Rasul Avazbek uulu, Member of the Board of Trustees and Deputy Minister of Education and Science, stated that Kyrgyzstan-Turkey Manas University made a great contribution to the development of the education system in the country, that for the first time a university carried Kyrgyzstan to the world league in higher education, and that Manas is an example and a pioneer for Kyrgyzstan universities in this respect. He said that they are honored to have Manas University operating in their country.

At the Board of Trustees Meeting, academic and administrative issues related to the University were discussed and resolved decisions.

During the meeting of the Board of Trustees, the most important decision was the opening of the Faculty of Medicine at KTMU and the increase of the salary of academic and administrative staff of the university.

The Last of the General Secretariat Seminars Was Held